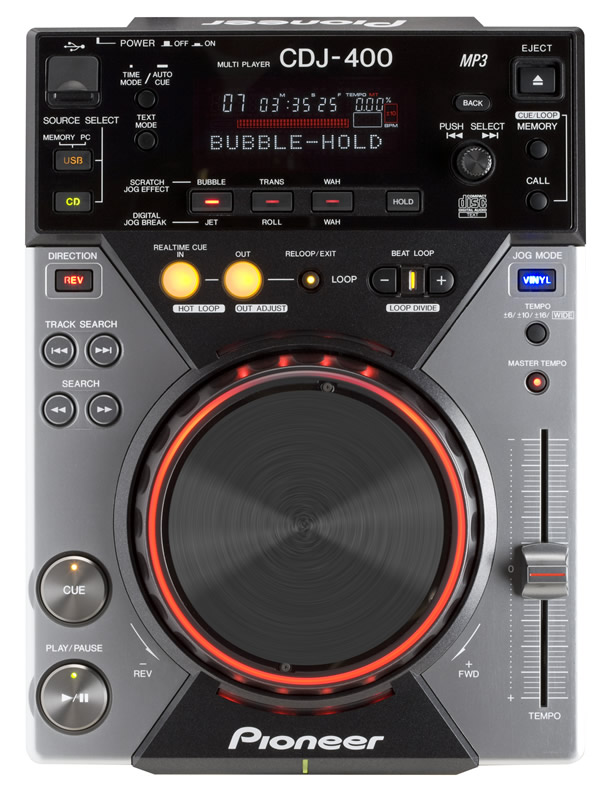 Our hire price is only $30 Each Unit - That's Sydney's Cheapest price.

1. USB Integration and MP3 Playback
The CDJ-400s cosmetic design is simple and compact yet elegant with all of its various controls and features located directly on top of the unit. A USB port found on the face of the player allows DJs to play their MP3 music collection from a wide variety of portable music devices such as thumb drives, MP3 players or external hard drives.

2. MIDI control via USB
As you'd expect, the CDJ-400 can control DJ and music application software. This is achieved by simply selecting the PC Source Select button, so that virtually all of the deck's buttons and slider can send MIDI control data via the PC USB connection.

7. Other key features
Digital Loop functions: A variety of loops can be created for additional audio effects
Beat Loop: Automatically creates four beat loop based on the beats per minute (BPM) of music currently being played
Loop Divide: Rhythmically divides the loop in halves to create different patterns
Hot Loop: Restarts the loop seamlessly from its entry without interruption of the music

Digital Jog Break: In CD mode the CDJ-400 contains three effects, Jet, Roll and Wah, which further enhances the audio by simply rotating the jog dial. The same buttons for the Scratch Jog Effect are assigned to the Digital Jog Break which are accessible at any point of play .

To Keep our Costs Low and pass the savings on to you we operate on an Appointment System,

This allows us to have long and convenient hours to suit you.

Campbelltown NSW - Sydney Wide Delivery and pick up for only $40.00

Showroom Access Via Appointment Between 9am and 10pm Sun - Fri

Show Room is only 2 minutes walk from Campbelltown Train Station.